Brits are the most sceptical about Cryptos future in Europe Featured

Confidence that cryptocurrencies will still exist in 2030 is slightly increasing in Europe but not in the UK.

Two-thirds of surveyed Europeans believing this to be the case, finds a new study by crypto exchange bitFlyer Europe.

Italians believe in the crypto survival the most, and us Brits the least.

The exchange has just published the results of its yearly Crypto-Confidence index, the 2020 edition, comparing them with the results of the first poll conducted in 2019. Per the report, the index was built from a consumer poll of 10,000 respondents across ten countries in Europe. Its purpose is to show the levels of confidence in European populations when it comes to the major question of whether digital financial assets will exist in a decade from now.

However, given that the poll was conducted in March, this year has brought another factor into the mix, which couldn't have been previously predicted - the coronavirus pandemic. It caused great instability in the value of both traditional and new assets.

Nonetheless, the poll has revealed that two-thirds, or 66% of the 10,000 people polled, believe that cryptocurrencies will still exist in 2030. This is an increase of 3 percentage points when compared to March 2019. Additionally, the increase is noted in all but two polled countries. This shows "that confidence continues to grow in cryptocurrencies, despite crippling effect of coronavirus on global economic landscape," according to the exchange.

Overall, the results "indicate a slow but steady progression of cryptocurrencies into the mainstream consciousness," according to Andy Bryant, COO at bitFlyer Europe.

"Although we might look at this as an achievement for digital currencies in spite of the challenging economic times we are facing, it is also worth considering that this may well be partly because of these times," he added.

"This is an important time for the crypto industry to demonstrate how cryptocurrencies and associated concepts such as decentralised finance can provide attractive alternatives or even substitutes for incumbent economic models, as we battle unprecedented financial times globally and look for novel solutions,” he stressed.

Also, 9% of Europeans (compared to 8% in 2019) believe that Bitcoin (BTC) will be fully integrated into society as a form of currency in 2030. The same number (compared to 7% in 2019) believe it will be used as a security or investment. Moreover, 25% of respondents - 2 percentage points more than in 2019 - replied that they are confident that cryptocurrencies will still exist in a decade, but that they have no idea how they would be used.

Meanwhile, Italy, a country that has faced massive struggles and experienced a peak in pandemic-related restrictions in March, "is the most confident," the report notes. Almost three-quarters, or 72%, of the polled Italians believe "in the longevity" of crypto. Not only that, but 12% of the Italians replied that cryptocurrencies will one day be used as a mainstream currency, making it the country with the biggest proportion of the population to believe this to be the case. The number also marks an increase by 2 percentage points compared to last year. "It is interesting to see that countries like Italy which have been hit hard by the COVID-19 crisis are expressing more faith than ever in cryptocurrencies," Bryant, said.

On the other side of that spectrum the report found the UK. Among the ten countries, it's "the least confident." Of the people polled in this country, over half of them believe cryptos will be around in ten years' time, but the UK is one of only two countries in which confidence in the future of cryptocurrencies decreased compared to last year. That said, the difference between the two years is just 1 percentage point. The 56% who believe in the crypto longevity, climbs to 61% when looking at the 18-44 age group specifically, the exchange noted. Nonetheless, only 5% of UK respondents think that cryptocurrencies will become mainstream currencies in ten years.

The Netherlands and Poland follow Italy closely, with 70% of the population each responding that there's future for digital financial assets. Polish respondents are also right behind Italy when it comes to cryptos potentially becoming mainstream currencies, with 10% believing that to be the case. Meanwhile, last year's number one country, Norway, dropped to the fourth place, from 73% to 67% of the respondents being confident that cryptos have future.

The percentage of consumers who believe cryptocurrencies will still exist in 10 years’ time based on March 2020 poll vs March 2019 poll: 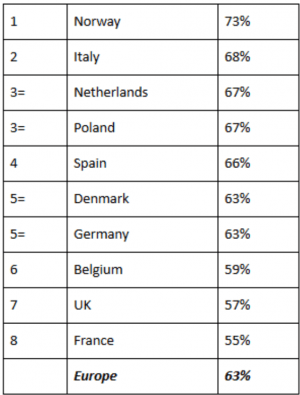 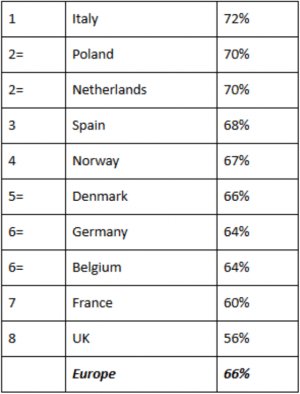 Carl comes from a Crypto tech background in Blockchain, his flair and attention to detail is very important to the success of this website. Carl is a freelance journalist who now prefers to work from home and has such a broad range of experience in the alt coin market, we always appreciate his knowledge and ideas.

Cryptocurrency Myths: Investing is safer than you might think

A cryptocurrency wallet is actually a program that stores private and public keys and it links to the blockchain in orde...

Can I create my own cryptocurrency? Yes

If you want to create your own cryptocurrency but you don’t have much experience in coding, you might be wondering if ...

Bitcoin and Ethereum (ETH) fees are going up.

Brits are the most sceptical about Cryptos future in Europe

Confidence that cryptocurrencies will still exist in 2030 is slightly increasing in Europe but not in the UK. ...

Anyone who is about to start crypto trading will usually be a little apprehensive, or they are full of enthusiasm; nothi...

The Bitcoin community has another significant grant to support open-source development.

Cryptocurrency Myths: Investing is safer than you might think

In the beginning cryptocurrency had a bad reputation because of links to black market trading, nowadays purchases are fa...

Are VPNs for Crypto transactions necessary?

Virtual currencies are no longer a fad. They are used all over the world and traded on Forex. Aside from the profit-maki...

Cryptocurrency hardware wallets are not full-proof

"The fact is that there’s no way to prevent a highly sophisticated attacker with physical possession of the device, an...

How can you spend Cryptocurrency?

I know that most of you have already heard about crypto but there are still some people who have some blind spots about ...

Online privacy is a thing of the past say Brits: Protect your Crypto

The following stats make you aware that keeping your crypto account details safe is more important than ever. ...